There have been changes to ASTRO Gaming’s highly touted A40 gaming headset since we reviewed it. The A40 TR (Tournament Ready) headset took the A40 design and gave it more flexibility through the A40 TR Mod Kit. Gamers were able to bounce between open or closed back ear cups as well as swap the ear cup and headband cushioning between mesh and leatherette. The ASTRO Gaming A40 is an excellent headset that opened new possibilities in the form of the A40 TR, and it still was just one tier lower than ASTRO’s highest end headset, the A50. Now, the A50 has been revisited, using the features seen in the A40 TR. At E3 2016, we dove into the new ASTRO A50 Wireless Gaming Headset.

The ASTRO A50 is a true wireless solution for the Xbox One, PS4 and PC. Through the new ASTRO A50 Base Station, the ASTRO A50 headset can be recharged and connected wirelessly for both game audio and chat. And yes, this relieves the Xbox One gamer of the use of a chat cable connected to one’s controller. The A50 can stay powered through 15 hours of gameplay. When you’re done with your session, just plop the A50 on the ASTRO A50 Base Station for charging. If you’re in a pinch for power, you can always feed a micro USB cable to the headset for on the fly charging.

ASTRO’s A50 communicates with the base station using low-latency 5Ghz wireless connectivity. That helps you enjoy the A50’s Dolby® Headphone 7.1 Surround Sound presentation without lag or interference. The A50 also sports their own built-in MixAmp™ for individually controlling game and chat volumes, as well as 3 preset EQ modes, using controls that are right on the headset. Those preset EQ modes jump between bass-focus, mid and high range focus, and a neutral for a fully balanced presentation. Add a noise canceling boom mic, and you’re all set to game wirelessly on the platform of your choosing.

As for those A40 TR features, the new ASTRO A50 Wireless Gaming Headset can be customized via the optional ASTRO A50 Mod Kit. Now, while the A50 remains a completely closed-back headset, you can venture to swap out the mesh/fabric headband and ear cushions for leatherette ones.

The ASTRO A50 Wireless Gaming Headset is ASTRO’s top of the line, 100% wireless product coming in at $300, with more comfort choices for the gamer and/or media-enjoying enthusiast. You just have to choose the version you want: the Xbox One/PC version or the PS4/PC version.

Check it out for yourself here! 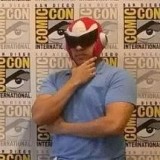 Double-Jump spends his day double-jumping over users' IT HelpDesk requests so that he has more time to double-jump in games. He enjoys double-jumping in PC, console and mobile games. His element resides mainly in Shooters, RPGs, and Fighters with a hint of the miscellaneous. The only time he sits still is when he gets his hands on a gadget.