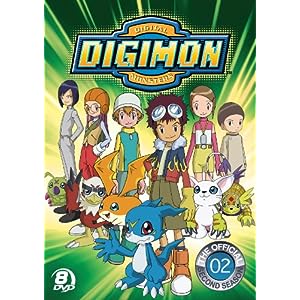 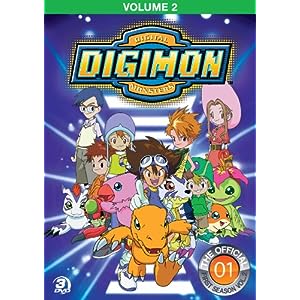 Is anyone else having a nostalgia moment right now? No? Maybe it’s just me but I can’t believe that I’m actually getting the chance to announce a contest for one of my all-time favorite series: Digimon!

In anticipation of the upcoming DVD releases for The Official Digimon Adventure Set: The Complete Second Season and Digimon Adventure: Volume 2 on March 26, I have some goodies to give away to a few lucky folks!

Continue reading after the jump to find out more and how to enter!

For those who can’t remember, the Digimon series was about seven kids who find out that they are actually a part of a group called the “DigiDestined”, humans who are befriended by Digimon and fight together to defend the world from evil. The first two seasons of the Digimon series follows the “DigiDestined” as they learn about their Digimon as well as each other and ultimately help them their Digimon “digivolve” into to stronger beings all while trying to find their way back home while trying to save the world at the same time.

Contest is only available to United States (US) Residents only. International residents cannot enter.

About Cinedigm
Cinedigm is a leader in the digital entertainment revolution. Cinedigm’s pioneering digital cinema deployment and servicing efforts, and our state-of-the-art distribution and exhibition software, are cornerstones of the digital cinema transformation. Cinedigm is also the leading digital aggregator of independent content in the world, providing end-to-end digital content delivery to theaters, across digital and on-demand platforms, and on DVD/Blu-ray. Through partnerships with iTunes, Netflix, Amazon, Google, Hulu, Vudu, Xbox, Playstation, and others, Cinedigm reaches a global digital audience. The company’s library of over 5,000 titles includes award-winning documentaries from Docurama Films®, next-gen indies from Flatiron Film Company® and acclaimed independent films and festival picks through partnerships with the Sundance Institute and Tribeca Film. CEG is proud to distribute many Oscar®-nominated films including “The Invisible War,” “Hell and Back Again,” “GasLand,” “Waste Land” and “Paradise Lost 3: Purgatory.” Upcoming multi-platform releases include “Don’t Stop Believin’: Everyman’s Journey,” “Come Out And Play,” “Arthur Newman,” and “Violet and Daisy.” Cinedigm™ and Cinedigm Digital Cinema Corp™ are trademarks of Cinedigm Digital Cinema Corp www.cinedigm.com.