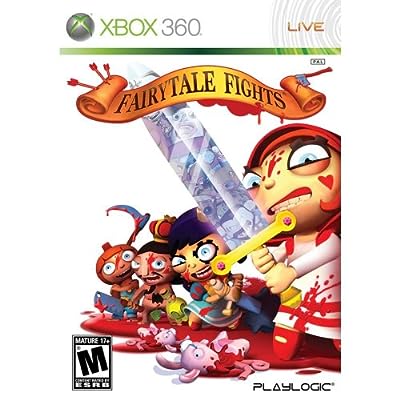 Just like most girls you know, I am no exception. I [heart] cute and cuddly things! I also [heart] seeing cute cuddly things do some pretty gruesome stuff.

I’ve broken it down to a pretty simple equation:
(Cute + Cuddly) ^Gore = Awesome!

The Happy Tree Friends are a perfect example. The Tree Friends are a group of cutesy woodland creatures that are always getting completely disemboweled. Each cute-filled episode ends in a miraculously, glorious blood bath. It’s absolutely hilarious and probably makes me seem like a really sick and twisted kid. Judge all you want but I found the same thrill while playing through Fairytale Fights.

Most may not know what Fairytale Fights is, and I don’t blame you. This game sort of fell below the radar and that’s kind of sad because the game is fairly descent and fun. Fairytale Fights is able to provide a unique look at a few well known characters in the fairy tale world. It was able to break through the monotony of FPS and music games. I’m a music and rhythm game addict (Have you read my other game posts?), so it was nice to play a hack and slash blood bath.

But I digress. Back to the game.

Fairytale Fights is an extremely cute platformer that allows you to play as one of four popular fairy tale characters: Snow White (Snow White and the Seven Dwarfs), Jack (Jack and the Beanstalk), Little Red (Little Red Riding Hood), and the Emperor (The Emperor’s New Clothes). And yes folks, the Emperor is naked!

As the story goes, someone has stolen the spotlight away from our four heroes and has left each of them a wee bit angry and craving the glory that they used to have. It is now your job to take one of these forgotten characters and bring them back into the spotlight by creating a brand new story. In this new story, you’ll have a storyteller following you; writing the details of your epic journey. He’ll be watching you along the way, detailing your travels as well as your battles. So, be sure to spill as much blood as possible.

But that should be easy.

The game provides a vast assortment of weapons to choose from. Some being traditional, like a knife, ax, gun and bat. While those are fun and all, I found joy in using the weirder assortment of weapons. You know, a half eaten lollipop, a bone, and a small furry creature I just pummeled with my fists. Anything you find along the way can be used as a lethal weapon and allows any imagination to run wild.

The only thing I hated was the camera. There was no way me to take control of the camera which leaded to some very frustrating platforming bits. I couldn’t tell where to jump and often spent a look of time just getting from one point to the other. But I found the solution to that, and what made this game an instant favorite for me: Co-op. You’ll be able to play through the entire game with a buddy. So, all those difficult jumping parts weren’t as frustrating with a buddy around to help you get across. And, to be honest, the game become uber fun with a friend. You’ll be able to poke fun at the blood battle going on screen as well as show off your most awesome kills through the kill cam. I must admit that the kill cam did get in the way at times, since the battle would still take place behind the screen blocking kill cam.

There is a multiplayer element to the game but since the manual didn’t really explain what I was supposed to do, I quickly abandoned it.

I know that if you google this game, you’ll probably get a ton of reviews saying how boring this game is. I absolutely loved this game. I did get frustrated at times because I couldn’t get through the jumping parts but that’s just cause I’m just not a platformer gal. I could never jump in games and I try to avoid it at all costs but there’s something unique to this game that is quite refreshing. This is just one girl’s opinion.